Bilbies are roaming the south-west of NSW for the first time in more than a century after 30 of the marsupials were released into a section of Mallee Cliffs National Park, protected by the largest enclosure of its kind in the southern hemisphere.

Listed as extinct in NSW, the bilbies were raised in South Australia and transported to the arid national park 800 kilometres from Sydney, where they were released into a 9500-hectare “natural time capsule” on Wednesday evening.

The small marsupial disappeared from the wild in NSW around 1910 after its population was ravaged by feral cats and foxes following European settlement.

AWC is working with the NSW government to re-introduce the bilby and several other near-extinct native animals, including numbats and quolls, to the bush.

Mr Allard said he hoped the animals would prosper behind the six-foot electrified fence.

“We’ve got to protect what makes Australia unique. Animals such as numbats and the bilby are a part of the Australian DNA, they’re a part of our natural heritage, they’re a natural capital,” he told the Herald.

“Ideally what they should do in their first 24 to 36 hours is settle into their new homes; they’ll start digging burrows down to two or three metres, they’ll very quickly find each other and start mating.”

Known as “ecological engineers", the bilbies are expected to transform the local environment as they burrow deep below the surface, turning over several tons of soil each year.

“I’ll go back to Mallee Cliffs in a few months and there will be burrows all across that landscape,” he said.

Nine other native mammals will be released in the enclosure, according to the NSW Government.

“We have an opportunity to bring them back to NSW national parks by using special fenced off areas and it’s important we do this,” Environment Minister Matt Kean said.

Mr Allard said 11 bilbies had been fitted with radio trackers, which would help researchers study their movement.

“We try and balance it between enough healthy males and females with the objective that they quickly meet each other and start making bilby babies.”

He said more bilbies will be added to the vast enclosure to manage their genetic diversity as they continue to breed.

Mr Allard said fencing was needed to keep the animals safe, as no amount of baiting or shooting would prevent native animals from being killed by wild cats.

“There’s no effective way to mitigate the impact of cats and foxes in the landscape, it doesn’t matter who you are or what you say about tracking and baiting and shooting, you can’t do that across the entire Australian landscape,” he said. 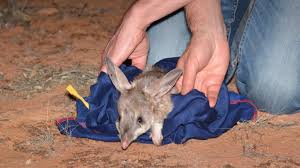