The huge effort to roll out new fencing for fire-affected farmers is gearing up. Thousands of kilometres of fencing were destroyed by the huge blazes across the north-east and East Gippsland in particular.

Support is available from both BlazeAid and the state government. BlazeAid co-founder Kevin Butler said several bases were being set up or were already established in far East Gippsland. Bruthen was already operating and had completed ten kilometres already. Other bases in the mountain areas included Buchan, Wulgulmerang near Gelantipy, Ensay and Omeo.

BlazeAid would also have bases at Newmerella near Orbost and Cann River. Mr Butler said fencing works at Lexton would be completed in three or four weeks and “that’s going extremely well”.

He said it was mandatory that for every new property BlazeAid worked on, volunteers brought with them ten steel posts. He said the initial post outlay was a “teaser” and ROLL UP: BlazeAid volunteers would start rolling up burnt fencing that is mostly replaced with all steel materials. If landholders wanted particular materials they could contact the local BlazeAid coordinator with the details. Landholders were asked to purchase half the requirements and BlazeAid paid the other half.

Mr Butler said the vast majority of BlazeAid's available funds went into wire and posts with constructions now nearly all steel. “The biggest problem is that farmers are very thoughtful and proud,” he said.

“Swallow your pride and get your fences up quicker and then help your neighbour.”

“Our priority is the landowner who rings us and says they are ready to go tomorrow, and we'll be there.” 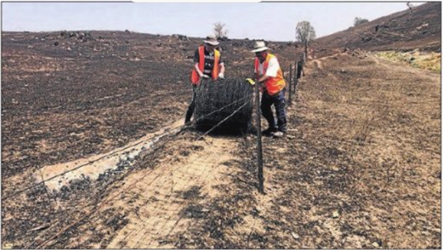 “But we are a shoulder-to-shoulder organisation and landowners have to be on the fenceline. “

Meanwhile the Victorian government has promised to pay half the cost of materials to repair or upgrade bushfire-damaged fencing that border national parks, state parks and state forests. According to the Department of Environment, Land Water and Planning, the government would fund half the cost of materials to provide an upgrade for fire-resistant and pest-resistant fencing to a maximum of $5,000 per kilometre.