A million more merinos will be grazing in Queensland's Central West by 2025, bringing much needed jobs back to the region.

That's the prediction of Morgan Gronold, senior regional development manager at the Remote Area Planning and Development Board (RAPAD), which represents the Central West's seven councils and covers 396,000 square kilometres, or nearly a quarter of Queensland.

"I see no reason why we can't be a wool powerhouse again," Mr Gronold said.

"There's still plenty of infrastructure out there that just needs a bit of a tidy up, a bit of WD-40 and [the shearing sheds] will go again."

His confidence is based on a wild dog fencing program RAPAD is overseeing on behalf of the Federal and State Governments.

To qualify, neighbouring farmers join together to form a cluster and exclusion fence their combined boundary.

"We're dealing with 175 properties, fenced just over 2,500 kilometres and protected just over a million hectares from wild dogs."

In the early 1990's, there were nearly six million sheep in Queensland's Central West. Now there are fewer than 200,000.

In the past give years, the state's sheep population has dropped by 70 per cent.

The industry went into freefall after wool prices slumped in 1992, but even as prices recovered, the growing wild dog problem forced many graziers to quit the industry and move into cattle, which requires fewer staff.

Mr Gronold said some of the graziers who applied for fence funding estimated dogs cost them a million dollars a year in dead stock, lost time and the hire of helicopters, shooters and trappers.

"Once you go in, you can't take your foot off the pedal because every day you're going out seeing stock that's mauled or lost," he said.

Under the RAPAD scheme, the Queensland government pays for 35 per cent of the cost of the fence and the land owner pays the rest.

Illfracombe graziers Maree and John McMillian are in a 45,000-hectare cluster with two neighbours and a combined boundary of 150 kilometres.

The 1.7-metre-high fence with a netting apron at the bottom to prevent dogs and feral pigs from burrowing underneath has allowed the safe return of 8,000 merinos to their property, Evanston.

"My husband actually gets a full night's sleep now, which was something he didn't for about three or four years," Mrs McMillan said.

"It has given us not only control of our stock in a far superior way but also given us back a normal life as well."

She is glad the distressing years of discovering dead and dying mauled sheep, lambs and even calves are over.

When the drough breaks, the McMilliams plan to nearly double sheep numbers and hire new staff.

Barcaldine mayor Rob Chandler said if hundreds of thousands of sheep returned to the region, shearing teams and farm hands would come along too bringing economic prosperity.

"Every team of six shearers supports about 13 people, they bring their partners, their kids, [we'll have] full footy teams again like we used to," he said.

RAPAD will soon call for applications for a third round of fence funding. 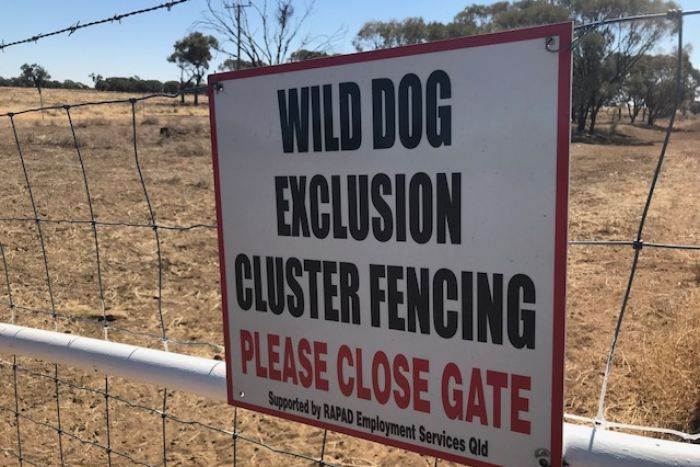 Mr Gronold said a future behind wire was the best chance the seven councils had to arrest the region's alarming population decline.

Most communities have lost on average 12 to 13 percent and some up to as many as 25 per cent.

In that same period, the state-wide population has grown by 6 to 8 percent.

Mr Gronold said fencing was a good investment for government, as the increased economic activity it generated delivered a $3.76 return on every dollar spent.

Longreach grazier Keith Gordon is in a three-property cluster.

His fence has resulted in higher lambing percentages and when the drought breaks he will increase his flock and his shearing shed will be back in use.

The dog problem led him to develop a dog-detecting and deterrence system, which can be monitored from home.

Interest has been so strong he has set up his own company to make and sell the units.

"I'll employ three or four people to start with, we can put these things together and then market them out of Longreach," he said.

Grazier Chris Egerton has been fighting dogs for more than 30 years.

"By the 1980's we were getting invaded and it got to a point where eight of us got together and formed a syndicate and employed a trapper," he said.

While the trapper took the pressure off, it didn't solve the problem.

Mr Egerton said his new cluster fence has proved the only solution.

"This is the first positive thing to happen since the 1950's," he said.